KENNEDY SPACE CENTER, FL. (March 22, 2017) – The Orbital ATK Cygnus vehicle is slated to launch its seventh cargo resupply mission (CRS-7) to the International Space Station (ISS) no earlier than April 18, 2017 onboard United Launch Alliance’s Atlas V vehicle, carrying more than 40 ISS U.S. National Laboratory sponsored investigations. The ISS U.S. National Laboratory is chartered to facilitate research in the microgravity environment that benefits life on Earth. The Center for the Advancement of Science in Space (the ISS National Lab) is leading the effort in partnership with NASA, industry, other government organizations, and academia to manage and promote the best use of the ISS National Lab. Among the major ISS National Lab sponsored investigations flying on Orbital ATK CRS-7 are the following:

Groups of small satellites can improve access to space because they are less costly, more easily customized, and therefore less risky to launch and operate than larger individual satellites. The Millennium Space Systems ALTAIR™ Pathfinder investigation tests and qualifies for space new platform technologies developed by Millennium Space Systems, a private firm that offers satellites for missions in low Earth orbit, geostationary orbit and deep space. The investigation will demonstrate that the ALTAIR design and technologies work as planned, paving the way for future satellite programs with NASA and the Department of Defense.

This investigation seeks to test the efficacy and drug metabolism of Azonafide ADCs in microgravity 3-D cell cultures. ADCs are therapeutics that target tumors through receptors on the surface of cancer cells, thereby reducing toxicity and increasing effectiveness of the therapy. Compared to cell cultures in a dish on Earth, cell cultures in microgravity serve as better tumor models due to specific cellular responses to the space environment. For example, cells arrange themselves into three-dimensional groups, or aggregates, in microgravity that more closely resemble tumors in the body here on Earth. These changes in the 3-D structure of tumors cultured in microgravity result in improved cancer models that are better able to predict the performance of therapeutics and accelerate the timeline for bringing a drug to market to fight cancer.

A second-generation nanosatellite that refines critical measurements for explaining the origin of the Universe. It uses an advanced materials detector system, a novel instrument configuration and a detector array twice the size of that used by the preceding CXBN mission. Data collected by the instrument minimizes critical uncertainties in subtle signals left over from the Big Bang and may clarify other sources of interstellar radiation as well. The instrument collects data for a year’s time and enlists the help of citizen scientists and K-12 groups in satellite tracking.

The purpose of this payload is to conduct a series of experiments to grow scintillator crystals. Scintillators excite when exposed to certain types of radiation and can be used in detectors, for safety monitoring or homeland security applications. This investigation will leverage the modernized Solidification Using a Baffle in Sealed Ampoules (SUBSA)* furnace, which operates inside the ISS Microgravity Science Glovebox (MSG).

*To learn more about this investigation, and the SUBSA facility, please visit the following video: https://www.youtube.com/watch?v=EDeG7tl1R1k

A CubeSat that tests out a new light-weight, longer-life battery system designed for the cold temperatures of space. A new configuration of high energy density materials known as ultra-capacitors, along with updated lithium-ion battery technology allows CSUNSat1 batteries to operate at very low temperatures without the added weight of a defrost system. A set of quantitative power and capacity goals are used to assess the battery system performance over a 200 day mission period.

Leveraging the SUBSA furnace inside the ISS MSG, this investigation aims to synthesize new types of semiconductor crystals in microgravity. The research team hypothesizes these materials will be similar to other semiconductor materials in its non-toxicity and that the new material can be developed at a much faster rate.

Genes in Space-2
Julian Rubinfien (Sponsored by The Boeing Company as part of the Genes in Space competition), New York City, NY

The rigors of spaceflight induce physiological, genetic, epigenetic, transcriptomic, and metabolomic changes within the human body. One such change is a shift in the dynamics of telomeres, critical protective caps on the tips of chromosomes. The shortening of telomeres over time as an individual ages is natural, but stresses can lead to aberrant regulation of telomere length, which has been implicated in a variety of diseases, including cardiovascular disease and various cancers. Understanding how regulation of telomere length can change during spaceflight and how this may contribute to symptoms of disease experienced by astronauts is important for future space missions. This investigation seeks to determine whether telomeric DNA can be amplified in space, a necessary step to create an assay capable of measuring telomere changes during spaceflight.

IceCube consists of a CubeSat launched from the ISS that performs first-of-a-kind measurements of ice particles embedded within clouds. These measurements not only advance atmospheric monitoring technology, they also fill in critical gaps in understanding of how cloud ice affects the weather and how cloud formations process atmospheric radiation. IceCube uses a sensor new to space exploration that detects ice particles of different sizes at altitudes that correspond to the upper areas of heavy thunderstorms or the mid-sections of hurricane systems.

About 90 percent of global trade is shipped by sea, but tracking of oceangoing ships is inefficient; many ships are unmonitored as they transit the world’s oceans, far from land and out of range of ground based beacons. The NanoRacks-LEMUR-2 satellites are part of a remote sensing satellite constellation that provides global ship tracking and weather monitoring. The satellites in this investigation are deployed from both the ISS and the visiting space vehicle, demonstrating the technology at a range of altitude bands.

This investigation seeks to incorporate magnetic cell culture technology into existing flight hardware and optimize platform operation to support continued 3D cell growth. This project will lay the foundation for flight experiments to explore the use of magnetic nanoparticles and magnetic fields to culture cells on the ISS. Implementation Partner: Bioserve Space Technologies

The Effects of Simulated Gravity on Bacterial Lag Phase in a Microgravity Environment (NanoRacks Module 55: NanoRacks-NDCCHS-Bacterial Lag Phase) studies the bacterial lag phase, a delay period before the start of exponential growth, which is much shorter in microgravity than it is on Earth. The experiment uses a centrifuge to simulate gravity in orbit, comparing microgravity and simulated-gravity Escherichia coli (E. coli) cultures to determine whether microgravity itself causes changes in bacterial growth.

This project uses the International Space Station to deploy a constellation of 28 CubeSats, from a total of 38, in order to study the upper reaches of the Earth’s atmosphere over a period of 1 to 2 years. This constellation is the result of an international collaboration involving academia and research institutes from 15 different countries around the world. The project, coordinated by the QB50 Consortium, receives funding from the European Union’s Seventh Framework Programme for Research and Technological Development. The QB50 satellites conduct coordinated measurements on a poorly studied and previously inaccessible zone of the atmosphere referred to as the thermosphere. The project monitors different gaseous molecules and electrical properties of the thermosphere to better understand space weather and its long-term trends.

This investigation represents a technology-readiness-level (TRL) advancement of SG100, a single board computer platform that can support the much higher processor demands of the current and future scientific and aerospace applications in low Earth orbit. The test period will be two years, with interim data report intervals. The technology will provide a low-risk solution for satellite developers and space-science researchers.

To learn more about the ISS, including past research and available hardware and facilities, please visit: www.spacestationresearch.com.

About the ISS National Lab: The Center for the Advancement of Science in Space (the ISS National Lab) was selected by NASA in 2011 to maximize use of the International Space Station (ISS) U.S. National Laboratory. the ISS National Lab is dedicated to supporting and accelerating innovations and new discoveries that will enhance the health and wellbeing of people and our planet. For more information, visit www.issnationallab.org. 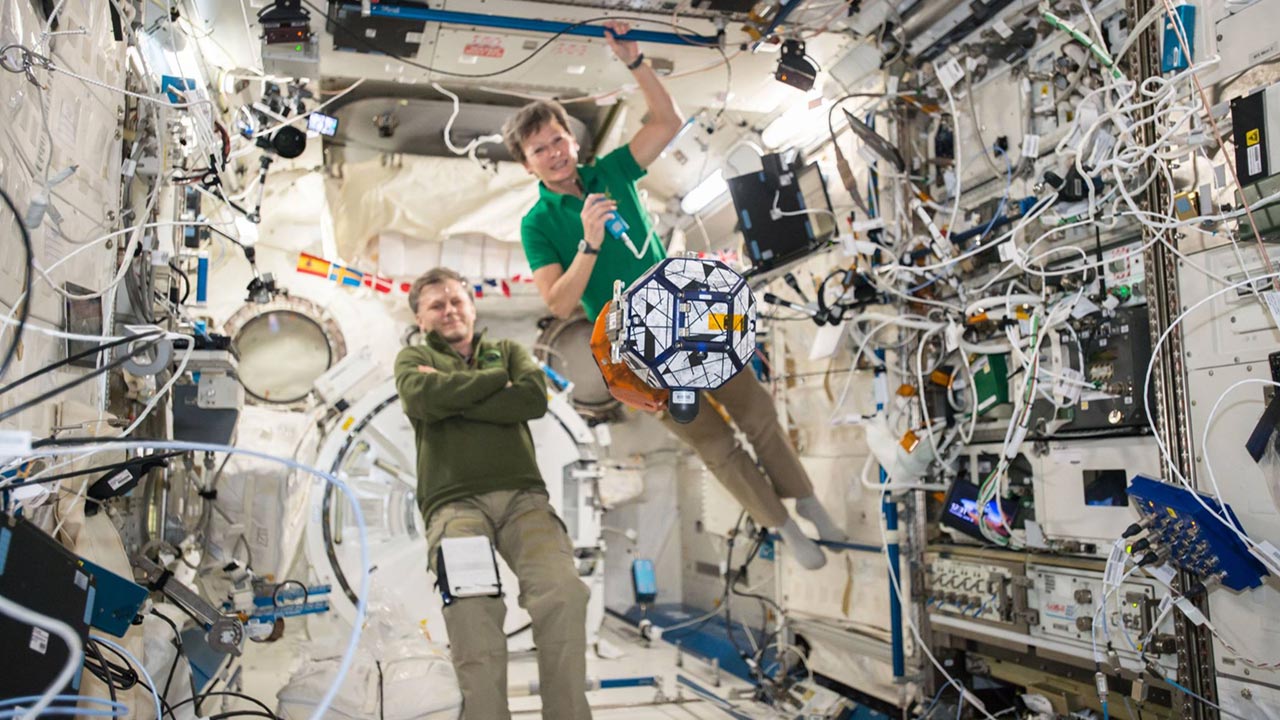